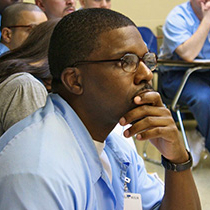 Johnny Page has come a long way since he enrolled in classes at Cook County Jail just to get off the deck. Locked up at eighteen, he had always enjoyed reading and was an exemplary student when younger. However, in high school he got caught up in street life and dropped out. Once he started taking classes again at the jail, “the old feeling came back, the feeling when I was a child of enjoying the challenge.”

Johnny was released on Sept. 26, 2014 after 23 years in prison. He earned his undergraduate degree in clinical psychology from Governors State University and his master’s degree in urban planning and policy from Northeastern University.

He works now as the co-director of programming and partnership for ConTextos, a nonprofit that works in Chicago and El Salvador to prioritize the voices of people impacted by violence and trauma. Johnny helps run narrative and memoir-writing workshops where participants are encouraged to look at experiences that have changed or transformed them. These stories are then published, both in-print and online, and discussed on the organization’s Complicating the Narrative podcast.

As part of his work, Johnny has visited El Salvador. He has also traveled to Uganda, in 2018, as part of the research team working on EJP’s reentry guide. He continues to work with EJP as a member of CAVE as well.

Johnny says that he believes he has a duty to continue serving his community. “My responsibility as a formerly incarcerated person is to blaze a trail so folks know when I walk through a room I’m sticking a wedge in the door,” he says. “And when someone comes behind me they’re responsibility is to open that wedge a little further, until we remove all the doors.”