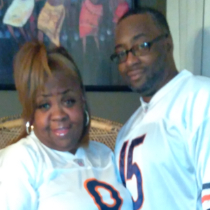 As a father of three, Robert Reed recognized while in prison that he needed to be a strong example for his children, Anthony, Diamond and Justin. Robert knew, as soon as he heard about EJP, therefore, that he wanted to join. Along with his wife, Arlinda, he has been connected with the program for more than 10 years.

A Chicago native, Robert served a 26-year sentence that ended Oct. 2, 2019. During his time at Danville he was a member of the first ever EJP reading group. He took courses with EJP and served as a founding member of CAVE. Along with Renaldo Hudson and Michael Brown, he founded Building Blocks, a DCC-based project that aims to use mentor–based methods to foster healthy and self-critical changes in individuals. The program has since expanded to other Illinois state prisons.

Arlinda and Robert have been together since they were teenagers. They were married in Danville after his release. Arlinda was part of the first EJP family even in Chicago and remains connected with EJP.

EJP helped Robert find his purpose and rekindle his love for learning, he says. “Being a student in EJP allowed me to regain my humanity through education,” he says. “I owe Rebecca Ginsburg a lot of credit for giving men in prison a space and an opportunity to rehabilitate their minds, heart and souls.”

Roberts works now as a Victim Advocate at Claretian Associates, a Chicago-based social services organization. There, he responds to and connects the most vulnerable with services such as victim compensation, food assistance, housing assistance and other resources.