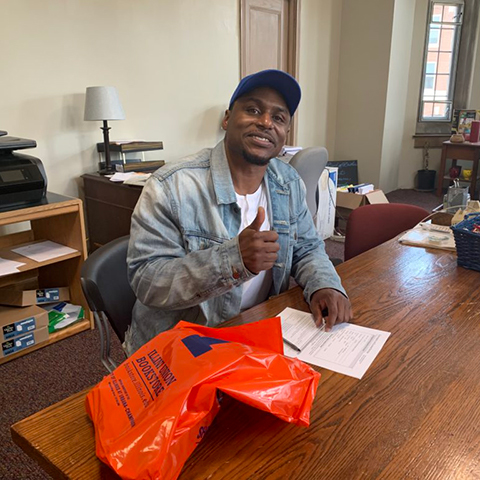 David Todd is a fervent advocate for education-in-prison programs. He credits such programs, including his time taking courses with EJP, with helping him find his two passions: cosmetology and mentorship.

David was released from prison at age 41 in 2017, after serving 21 years. He decided while in prison that he needed to change his life. “The thought of being in there twenty years and not being able to see my kids and family compelled me to want to find another way.” he says, “I thought I wasn’t going to make it.” He started taking classes in writing and speech, participating in any programs he could. He earned an associate degree from Lakeland College at Danville and then began taking classes with EJP.

After transferring to another facility he earned his cosmetology license, before being released in 2017.

David returned home to Chicago, where he worked with READI, an anti-violence program then run by Cure Violence. He served as a mentor helping transition people away from violence. Later he helped formerly incarcerated people with reentry. In those positions he found his love of mentorship.

David now owns his own barbershop in Chicago called Groomfly. He also volunteers as a mentor with Precious Blood Ministry of Reconciliation, a restorative justice group, and New Life, a juvenile justice program based at the Illinois Youth Center in St. Charles. He was the EJP New Horizons Award recipient in 2020.

In the future, David hopes to combine his love of mentorship and cutting hair by turning his barbershop into a nonprofit, where he would provide the at-risk youth and the underserved with resources, haircuts and conversation. He also wants to found a separate safe space, where people who have struggled with violence or injustice could come to share and talk, pray and meditate, seek spiritual advice and find peace.