Home > EJP Blog > From surviving to thriving: Happy’s story on the importance of education to reentry 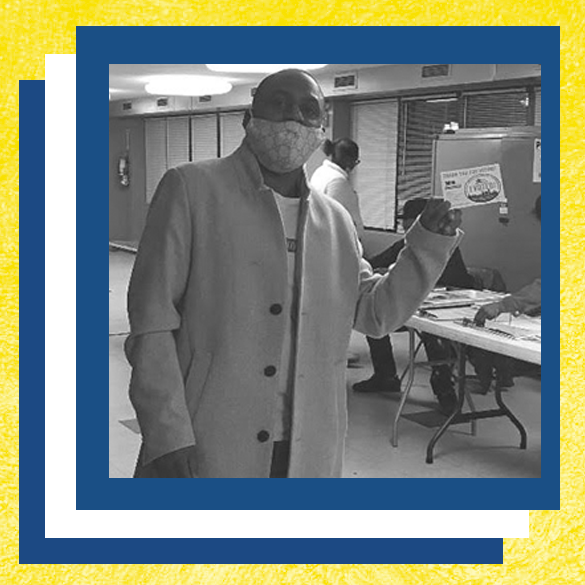 After being incarcerated for 22 years, one of David “Happy” Todd’s biggest challenges upon release was adjusting to his family and their way of living.

Happy shared his reentry experiences with his family as part of EJP’s 2022 Impact Week, which featured EJP alumni speaking to small groups of EJP supporters via zoom. To them, he also explained how the education he received in prison helped him to thrive since his release from prison.

Happy is the founder and owner of Groomfly, a men’s wellness and grooming establishment, and Groomfly Mentoring, which works with  trauma-impacted youth. He also serves on EJP’s Advisory Council.

Happy’s discussion focused on how access to higher education while he was in prison contributed to his post-release successes.

His outlook is shaped by a quote from Maya Angelou that deeply resonates with him: “My mission in life is not merely to survive, but to thrive; and to do so with some passion, some compassion, some humor, and some style.”

Happy describes the initial reentry process as “just surviving,” focusing on attaining the bare essentials such as a job and a place to live.

He believes education is key in the process of becoming successful and thriving.

Happy says that some members of his family continued to interact with him as if he were still his past self, before his incarceration—a person whom, he said, no longer existed. Furthermore, it was difficult getting his family on board with his new goals in life. Happy also wanted to help his family with their aspirations.
“In order for my people to be able to change, which (was) my family at the time, I have to be an example. I just can’t be talking about (it),” Happy said.

The constant resistance was taxing. “Once you get resistance, you’ll get depressed. You’ll want to surrender,” Happy said.

Still, Happy worked hard to be a role model for the people in his life and eventually inspired a relative to start their own trucking company.

Role of support during reentry

At 14, Happy ran away from home and soon became incarcerated for the first time.

Looking back, Happy believes that if he had proper reentry support the first time he was released from prison, he may not have returned.

Released at 41 after the second time he was incarcerated, Happy says that he didn’t need money when he came home–he needed opportunities. “It’s about the support.”

Happy recounts the role EJP played in helping him during reentry.

“They followed up. They didn’t give up on us. They didn’t say ‘okay, well we already did this.’ They came and said ‘okay, man, we’re gonna push you to the next level,’” Happy said.

Happy knew that having a mentor and someone there to guide you can make a big difference. This is exactly what Happy has become for others.

Since reentry, Happy has been active in his community through advocacy and mentoring.

In October of 2018, Happy founded Groomfly LLC, a men’s wellness and grooming establishment. He also started Groomfly Mentoring in January of 2019 as a way to support trauma-impacted young people.

He has a trademark and filed for a patent on his own—something he learned through books he read in EJP’s  resource room at Danville Correctional Center.

Happy is proud of the work that other EJP alumni have accomplished as well. “[They were] able to develop so many things from that resource room. From our not for profits, to our presentations, how we want to present ourselves…to how we conduct our lives. A lot of that stuff was composed right there in that resource room, and that was the peace.”

Although Happy no longer has the resource room, he has found other ways in achieving a peace of mind.

“Right now, I just find peace in just removing myself farther and further away from who I used to be,” Happy said.